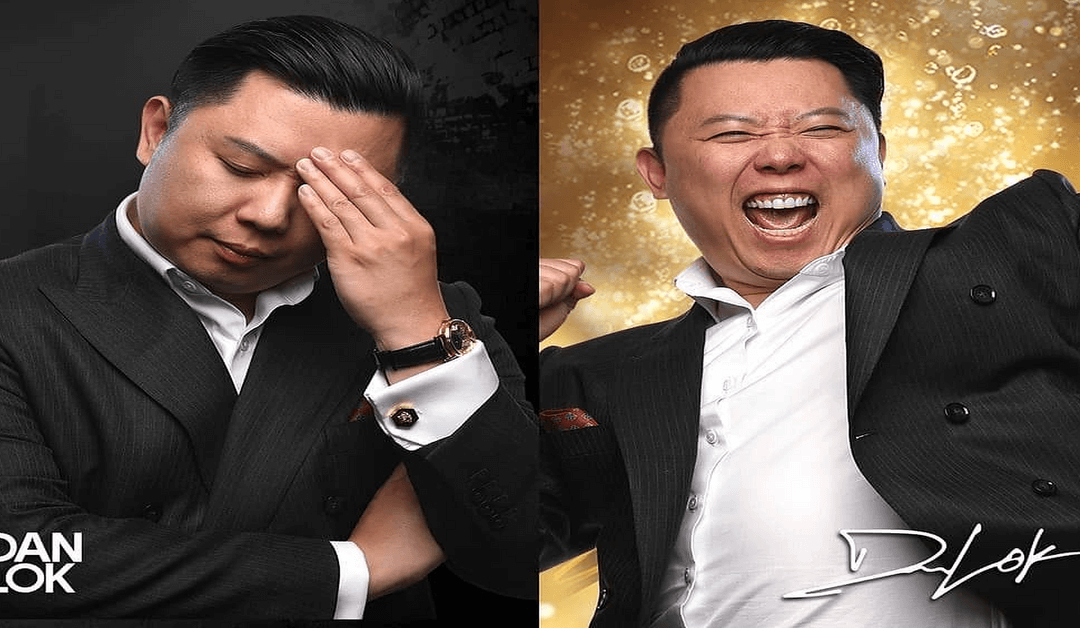 People desire wealth, not the effort required to obtain it. That’s why geniuses scam artists like Dan Lok and Tai Lopez are thirsty: they thought out such a way to play in a pool reminiscent of “Tower Heist” while drinking cocktails with gorgeous beauties. People are unwilling to put up the momentum required to obtain what they need, and we all desire quick fixes for love, wealth, and prosperity.

According to a survey of 2,000 full-time employees, 55% said they’d like to turn a pastime into a business venture but are hesitant to do so for a myriad of purposes. At this point, con artists like Dan Lok come in, capitalizing on people’s desire to sell their courses in the name of power and financial freedom. Find out why Dan Lok is a scam artist? Today, we will expose Dan Lok and show you how he become a millionaire by manipulating ambitious and broken people.

Dan Lok is a multi-millionaire business person, presenter, and scam artist. Dan Lok was born in Hong Kong in 1981 and migrated to Ontario when he was 14 years old. Like any fake guru, Dan claims that he’s started young and worked on various projects in his biography. Indeed, he started internet marketing as a youngster and failed 13 companies.

If you ask how dan lok become a millionaire? The short answer is coaching like all famous scam artists. Dan generates from selling training programs he has put together, regardless of whether he is likely to dabble in copy-writing from time to time. You can check out Dan’s YouTube page to see what he has to offer.

What Does Dan Lok Do?

Dan founded the Dan Lok’s Vancouver Business Entrepreneurial Conference in 2014, and High-Ticket Closer was released a year later. He has written 12 books, including FU Money and Influence. Lok is also a Viral hit, having over 2.4 million subscribers. He teaches classes in ( He’s not an expert at anything except Bla Bla, and all his videos include only essential information anyone can get for free online ):

It’s possible that if you’ve ever considered selling high-ticket things or services and sought online for information on how to do it, you came across Dan Lok. He’s a hugely successful business genius with the cars, mansions, luxury brand jets, and expensive advisors and associates to prove it.

He tells the same story of how he lived in poverty. While he was young, his parents divorced, and his dad abandoned his mom to fend for herself while parenting him. It’s a horrible start to the narrative. However, his lifestyle dramatically changed when he learned copywriting and realized that he could charge high-ticket prices for his services. Dan Lok has been a professional scam artist for years and was exposed in the recent Netflix production Money Explained.

Dan Lok claims he owns an estimated net worth of $86 million ( For sure. it’s not an actual number and just propaganda). Before breaking into the realm of prosperity, he flopped in 13 separate business enterprises. Dan eventually became a multi-millionaire with various firms, consulting contracts, and programs. He presently charges consumers more than $10k per hour for his business solutions. Dan Lok is also the author of 15 novels. So, how does someone who failed in 13 business ventures start teaching others the secret to becoming wealthy?

Why Dan Lok Courses Not Worth Your Investment?

Dan Lok describes himself as an entrepreneur. No one knows anything about his organization except that he has a YouTube channel and sells programs. In truth, according to web research, he is a Vlogger who gets money by selling tutorials. Dan Lok isn’t much of a cook, and otherwise, he would have made a course on it if he hadn’t already. We have done deep research, and we advise our readers not to buy anything of his scam programs. Let’s look at his courses and see if they value the audiences or not?.

For this program, he made movies like “how to generate income with a smartphone?” for this program. He reveals HTC at this point. He also gathers contacts from the messaging chatbots in return for his eBook “FU money.” As a result, he launches a high-ticket closer campaign. After that, you’ll receive a message inviting you to schedule a call with a specialist.

He’ll ask you a few questions to discover whether or not the high ticket closer course is right for you. His crew also promotes advertising on Facebook and YouTube if nobody has scheduled a call. Once you’ve designed your call, he’ll offer you a free webcast that explains what a High Ticket Closer is and how you can profit from it. Closer will ask you multiple things in the end:

You are an obvious match for a high-ticket closing if you respond affirmatively. The program lasts seven weeks. Each week, you will have a single class and the closer calls the participants and informs them that the lesson will be live. All courses, however, are pre-recorded.

You’ll also be invited to join a redundant Facebook group and a Discord room where you may role-play with other learners. You essentially rehearse with the other pupils. Dan Lok assigns an activity in every lesson that you must turn in to his staff. No one responds when pupils raise issues when completing a project.

Dan also goes by the moniker Sifu. Sifu is a Chinese term that describes “lifelong teacher.” He stated that you must mean it if you address him as Sifu. Otherwise, refer to him as Dan Lok. He essentially engages in mental contortions. Another of the chores in the project is to view ten Dan Lok videos nearly every day, and that’s how he keeps getting people to watch his YouTube page.

Dan isn’t content with swindling $2500. He incorporates the inner circle in the seventh week. To put it simply, he refers to the seven weeks as secondary school. The University for high ticket closing is in the inner sanctum, and you’ll receive more advanced instruction. Can you figure out how much the inner circle costs? $2000 down payment with $200 per month.

Anyone interested in working for Dan Lok and other influential people should join the campaign team. Yes, you will have the opportunity to collaborate with marketers. However, many inner circle participants claim that they never made any money and that they worked for free for influencers and Dan Lok.

Those who have joined the inner circle have told their experiences on the Coffeezilla platform. Dan Lok is unsatisfied even after receiving substantial amounts of money, and he seems to want to raise the price. In Vancouver, he hosts a ceremony where you can encounter other influencers. However, to attend the ceremony, you must pay a fee of $100. We believe it is exempt for the inner circle, but additional fees are.

However, there is an inner circle for the inner circle. According to Dan Lok, you will receive additional details in this group and will be able to contact him personally once a month to settle any questions. Can you predict how much this second inner circle will cost? $2500 per month.

You’re likely registered in another guru’s programs and courses. Perhaps you’re also looking for more top-tier professionals. However, we’ve never seen somebody charge such a heavy price other than Dan Lok. Maybe this is how he earns his money? He earns his money by scamming people to join more and more groups without any useful information.

5. No Profit for Anyone Other Than Dan Lok

None of the questioned students said they had made a single cent. However, a handful of them was successful in making money. Do you have any idea how they made some money? They do this by bringing in more people and students for Dan Lok courses. His programs are known to be crazy expensive.

When you speak with someone on the call and get them to join one of his courses, you will receive a small fee if you can close the deal. That is all. That is the only way his students have made money so far. BTW is the same strategy used by another famous scam artist John Crestani who charge his students 999$ for motivation (funny joke)

You may find the property in the “Three Harbor Green Tower” at 277 Thurlow Street, Vancouver, Canada, if you do your homework and use the data in his presentations about his wonderful penthouse. If you look up photographs and videos of the mansion on the internet, you’ll notice that it’s significantly larger and has walls at least times as large as the property featured in his footage. Furthermore, it is a weekend rental penthouse for celebrities or wealthy people. The luxury house is not his residence, and he only uses it to film movies and deceives people.

7. The Repeated History and Lies

Dan’s difficult childhood challenges are a narrative you’ll see from him repeatedly; he was born in Hong Kong, and his mom relocated to Canada when he was 14 years old. His dad remained in Hong Kong, and his first job was sweeping the yards of wealthy homeowners. His life transformed when he met Alan Jacques, his tutor.

You will never uncover any further information on the places or circumstances of his business career. It’s the same great narrative told over and over again. You could tell a narrative has been remembered when it is mentioned several times in the same environment using the same language. Consequently, it is a lie.

You’ll notice a trend after viewing Dan Lok’s clips for a long time. He’s always lecturing about generating money, the importance of authoring, and how we all have to begin hustling — and that’s all. You’ll have no idea how the man gets income even after viewing hundreds of videos. One thing is certain: the way he earns millions has never been the manner he indicated during one of his “Boss in The Bentley” segments regarding copywriting.

Everything about his mentorship is available in Youtube for free. The course’s composition is as follows:

Is Dan Lok a Scam?

The short answer is yes. We cannot emphasize it enough. Even if the information was worthwhile, you shouldn’t ever engage in programs that offer you fish in a jar. After completing one of those classes, nobody has claimed an increase in profits. The benefit of obtaining the inspiration and being guided into the proper position, according to numerous assessments of persons editing such information, comes in getting the desire and being led into the appropriate position. All of the extra information is nonsense designed to sell you air.

There are numerous evangelists of the QMMM (Quick Money-Making Myth) these days. They’re all offering the same Paradise in different contexts: how they become wealthy in no period and with little expertise, how they’re experts because they’ve gone through it, and how you – the audience – should do the same. To get the same outcomes, you’ll need to enroll in their program and learn everything there is to know about “The Secrets.” They are all scammers, and Dan Lok is the high king of such scammers.